How to display more than 100 documents with graphql?

Hi, in my project i have more than 100 documents per Custom Types to display, but the problem is that prismic graphql only return a maximum of 100 documents and the rest canot be fetch.

I see this documentation who explain how to paginate the results : https://prismic.io/docs/technologies/paginate-your-results-graphql but this way requires to duplicate the query and put a cursor id manually. What does not very flexible for a big project...

Is there a way to automatize the pagination ? Or make a loop in a graphql query ? Is this possible with the new plugin gatsby-source-prismic ?

Thank you for your help !

Hello @baptiste, thanks for reaching out.

With the gatsby-source-prismic-graphql plugin you can only return 20 documents per request. This is because the plugin is based on Prismic’s GraphQL API. In that case, the documentation you need to read is the following:

Paginate your results with the Prismic GraphQL API

This page describes how to paginate your results with the cursor-based pagination used by the Prismic GraphQL API.

The gatsby-source-prismic plugin, on the other hand, fetches the data using REST API. It does not have the limitation that GraphQL has. Here is the documentation to create pagination with Gatsby and this plugin:

Learn how to implement pagination in your Gatsby project.

If you need it, we have a dedicated guide to migrate from one plugin to the other one.

This topic was automatically closed 24 hours after the last reply. New replies are no longer allowed.

Hello, I’m seeing a similar issue to the original question (I’m not using Gatsby but the question is actually related to the graphQL API).

Obviously, switching to use the REST API fixed the issue for @baptiste but the question ‘How to display more than 100 documents with graphQL?’ is still unresolved.

When doing a graphQL query for multiple documents that should return > 100 results, the totalCount field is always limited to 100.

I’m aware of the max 20 documents limit and how to use cursors and pagination to retrieve all the results. But the problem is that there is this mystery limit of 100 that isn’t documented anywhere. The closest mention I can find is for the @prismicio/client that talks about a ‘default and maximum page size is 100 documents’ for standard get methods like getByIds but that get-all methods like getAllByIDs can be used to avoid this limit.

I’m using ids_in to retrieve all matching documents of a custom type. Is there a similar method to getAllByIds available for the graphQL API or a way to increase the limit above 100?

Our repo is metier.prismic.io and this is a reduced test case query:

When this array of 157 valid document ids is passed in it always returns a totalCount of exactly 100.

As @baptiste mentioned, we could run multiple queries 100 items at a time using a manual cursor id but that seems inflexible for a big project.

I had a chat with the development team. Now it's possible to retrieve a maximum of 100 documents per request. We've just updated the documentation to reflect this change.

Thanks, @Pau, that’s very useful to know that we can now retrieve up to 100 documents per request.

The array that I’m passing to the query includes 157 unique and valid document ids but you can see that the totalCount being returned is 100.

If you delete some ids from the beginning of the array and then run the query then it still returns a totalCount of 100.

Unfortunately, this means that I can’t paginate to get the rest as hasNextPage is false because the response “thinks” it has returned all the results when I know there are still more that should be returned.

If you run the query without the id_in filter to retrieve all documents then it returns a totalCount of 471 so I know that in theory it should be possible to match over 100 documents in a query. It’s only when using id_in to filter the results that this invisible limit kicks in.

I'll raise this question to the relevant team. We'll get back to you as soon as we have an answer.

Ok so, the solution is pagination. As explained in this section of the same doc. Use the after argument to be able to get the documents that come after the given first number:

Paginate your results with the Prismic GraphQL API

This page describes how to paginate your results with the cursor-based pagination used by the Prismic GraphQL API.

The team created a sample project to exemplify pagination. You can check it out here:

This page showcases the example projects available to learn how to use Prismic with GraphQL.

I’ve already got pagination set up and working, that’s not the issue here.

There’s a limit somewhere on Prismic’s side that’s causing the query to return incomplete results. It’s not in the documentation and it breaks the pagination example you shared so I can only assume it’s a bug.

Pagination in Prismic uses hasNextPage to decide whether there are still more documents to fetch. This code snippet is taken from AllPostsLoader.js in the react-graphql-pagination-example project.

But after retrieving the first 100 documents from my query hasNextPage is false meaning the script won’t trigger another query.

I’ve tried querying the first 99 results, taking the endCursor from that result and passing it in as the after variable for the next query and it only returns 1 document. So totalCount returns 100 and hasNextPage is false after retrieving 100 documents.

It’s clear that only 100 documents are being returned and I can’t retrieve any more using pagination.

Please could you test using the info I’ve provided for our repo (metier.prisimic.io)? It’s easy to spot it happening in the graphQL explorer with these steps.

So that means that valid document ids after the first 100 are being ignored. The first query should have returned totalCount = 157 and hasNextPage = true meaning I could use pagination to retrieve the remaining documents.

Hello @pete1, we're reviewing your use case with the dev team. We'll get back to you shortly.

Hello @pete1 we've sent you a dm asking for your project details. Let us know if you got it.

Ok so, in your query you'll need to send an ID after that will find where to locate the cursor. Only then the query will know where to look for the next pages:

The example you shared does indeed work using after. But it’s querying allProducts without the id_in filter and so returns every single product, which is not what I need. 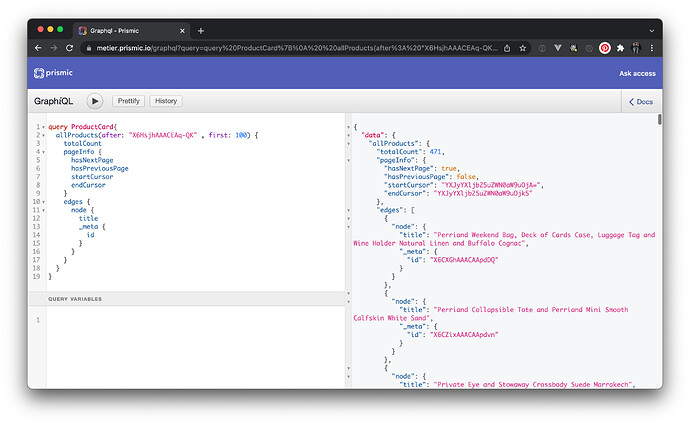 I explained previously that I’ve tried this and it works as expected when the id_in is not used.

If you run the query without the id_in filter to retrieve all documents then it returns a totalCount of 471 so I know that in theory it should be possible to match over 100 documents in a query. It’s only when using id_in to filter the results that this invisible limit kicks in.

Please try the following in our repo’s graphiQL editor using the info I’ve already shared to see what I mean:

@pete1 I got some more info that can be helpful.
I was able to replicate the error with the id_in operator. It's true that the cursors aren't working along with it. So the pagination won't work. But what you can do instead is to paginate using your ids by batches of 100. Here's an example of how to do it:

Let us know if this is helpful.
I reported the issue to our product team.

Great, thanks for confirming and suggesting a way around the limit. I’ll try splitting the ids up into batches as suggested.